SOME RANDOM RECOLLECTIONS OF MOSSY POINT, BROULEE, TOMAKIN, AND BURREWARRA POINT, MOSTLY SINCE THE 1940s.

AND EVEN A FEW FACTS JUST TO CONFUSE!

This Web site was launched by the Broulee Mossy Point Community Association on Friday 10 April 2015. We think that this page should be an eternal draft, and we're asking for bona fide additions and comments.  To add or comment, email to:

Still Lots of Readers!  In June we worked out that since this web page was first published in April 2015, 32713 visitors had racked up more than 100,000 visits.  As of today, this page has been visited by 485 new visitors in the last 30 days.  We're pleased that we're not the only ones interested in local historical trivia, thanks for your support.

Broulee Bay extends from Burrewarra Point in the North, to Broulee Island in the South. It takes in Burrewarra Point and Barlings Beach. On its shores you'll find Tomakin, which was Tomago until it became Tomakin in 1880, and that was changed to Sunpatch in 1962. But Sunpatch only lasted a decade or so until the name went back to Tomakin.  Broulee Bay also  has on its shores Mossy Point, which was Connells Point until 1946, and lastly, Broulee. 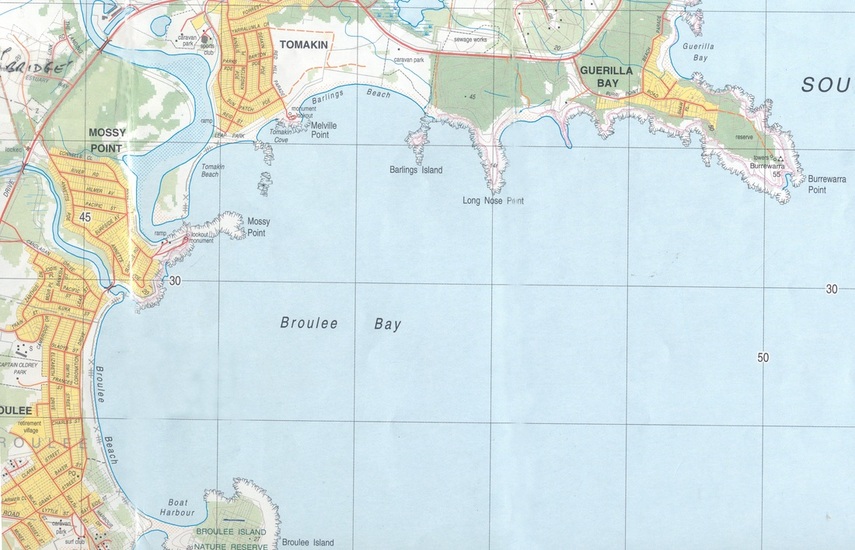 Some recollections are from fading memories, and some from hard to read handwritten records.   Some mistakes will have been made.

Most of this trivia is or was 'common knowledge', and we have added to or filtered some of that common knowledge and written it down in good faith as a light-hearted conversation piece, without extensive research and checking.  So all of this is neither definitive nor precise, and we apologise for the errors.  We are grateful for the help from the late Elaine Clark, from Jenny Edwards, from Ted and Jane Radclyffe, from Ellen McDonald and many others.  We also thank Jenny Cameron for some beaut old photos.

This website comes with the compliments of the Broulee Mossy Point Community Association.  To learn more about the association, and even download a membership form, click here.

Once again, we think that this page should be an eternal draft, and we're asking for bona fide additions and comments.  To add or comment, email to richthefish119@gmail.com

At the top of this page there are buttons to take you to pages for A to Z, People, Places, Events and a Gallery.  We suggest that to start you click on the A to Z page, and we hope that you enjoy what we've done.