Another attempt (also in the 1950s) saw a short training wall of rocks, concrete and old four gallon drums diverting the outgoing tide away from the newly blasted channel to try to keep the original channel open. It didn't work, and broke down and disappeared after a few years.

The road bridge over The Creek was opened in 1966, at first it didn't have the granite boulders blocking the water flow at each end. Once they were in place the course of the creek was changed, this made dinghy access to the Bay even worse and it is now a very rare occasion for the channel between the rocks and the beach to be sufficient for a dinghy to be rowed out at anything less than three-quarter tide.

There were at least three footbridges, second and third were further upstream from the first. The last one was just downstream of today's road bridge that opened in 1966.

The footbridges were built like the jetties on The River, although the first one had piers that leaned in at the top.  The second (built about 1947-48) had no handrails. The third, built in the early 1950s had a wire fence instead of a handrail, we think it was rebuilt with a proper wooden handrail after much of it was washed away in a flood.  If the last footbridge wasn't a rebuild of the third, then it was the fourth.

Elaine Clark used to re-nail the boards down when they came loose, which was fairly often (Jim Pike used to ride his motorbike across it to and from work). 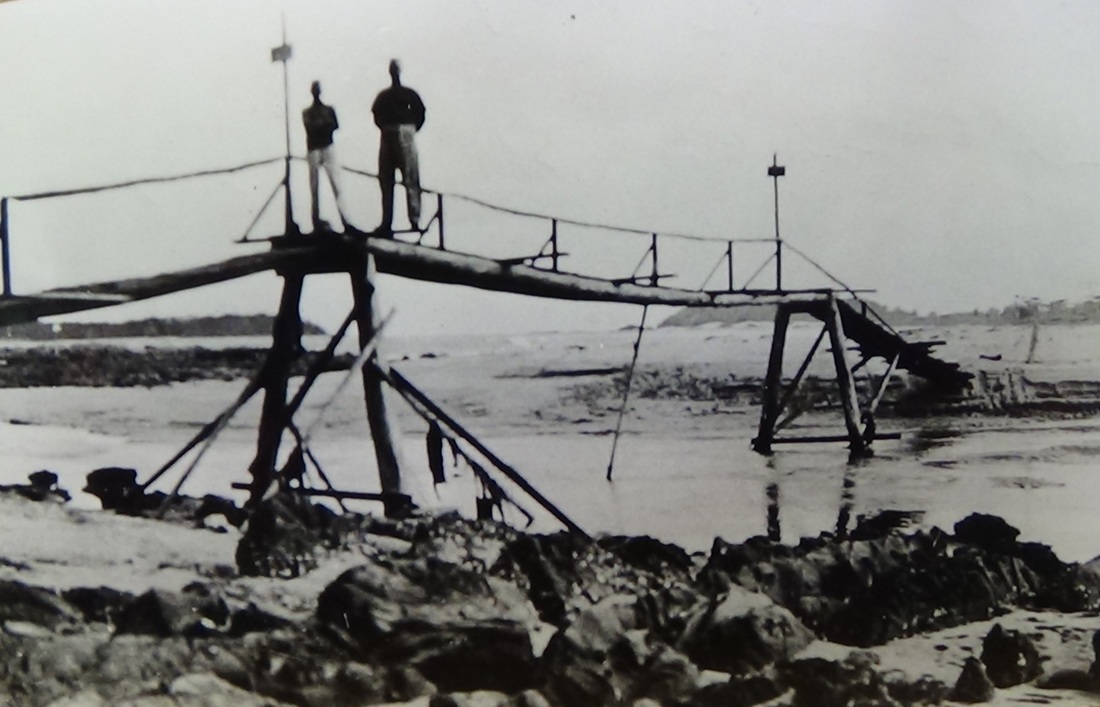 This footbridge was shown on a 1942 map, it's probably the first. It's built along the lines of a rope bridge for strength. Photo courtesy of Moruya & District Historical Society. 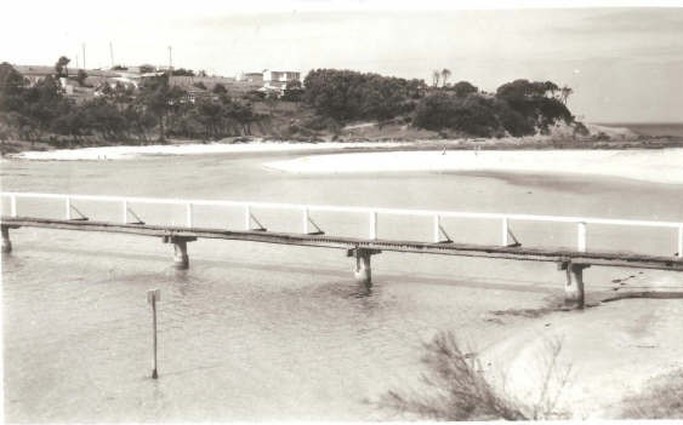 3rd and last Footbridge c1960. JC.
In the Creek there were no oyster leases with racks of oysters as there are today, but there were leases over rocks that were naturally oyster covered. The rocks at the mouth of the Creek were within a lease, there was until at least the late 1950s a sign there proclaiming the lease, and showing its registration number. Another lease was just upstream of the bridge, on the Mossy Point side. For many years Ed and Elaine Clark held leases over the oyster-free rocks upstream of the bridge on the Broulee side to keep them from being seeded with oysters and spoiling the area for water recreation. For people other than the lease holder, you could not harvest oysters from a lease and take them away, but you could eat them on the spot.


After a catamaran was sailed into The Creek and a growing number of motor boats were being driven there, in 1981 boating in The Creek was outlawed, but that didn't apply to small craft paddled or rowed.  Spearfishing in The Creek had been prohibited for some time before that.

The new bridge across the creek. From a 1966 postcard. RF
Right at the beginning of 1966 the road bridge linking Mossy Point and Broulee was opened. It had cost £23,000.

In 1980 the bridge on George Bass Drive across The Creek was opened. 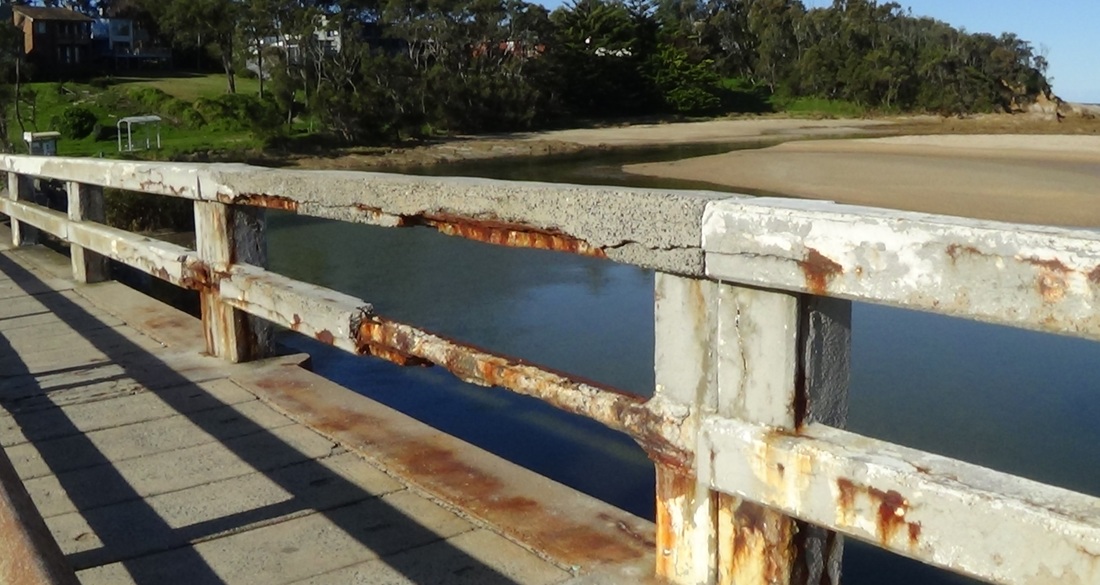 The sign at the bridge linking Mossy Point and Broulee says Candlagan Creek and that's its official name, but there's a story about that.

In 1828 Surveyor Florance drew the original survey map of the area, it clearly called the creek Cundalgah. A Mossy Point Progress Association record of 28 April 1981 notes that: “The Field Book of surveyor James Florance, compiled in 1828, speaks of Tomahgan [River] and Cundalgah. In a [handwritten] letter of 1828 he spelt the Creek's name Cundhalgah or Cundhalgan.”

The NPWS Broulee Island Management Plan tells us that although Florance did not provide any explanations for his choices of names, it was departmental policy at this time to assign phonetically-derived Aboriginal names to noteworthy landscape features.

But a map drawn by the surveyor Larmer in 1839 called the creek Candlagan.

In his will dated 1884 "Alfred Allabin of Bim Bimbie in the county of Saint Vincent in the colony of New South Wales, farmer," included "I also give and devise absolutely and forever all my fifty acres of land situate in the county of St Vincent bounded by the Candlegut Creek being part of the Oldrey Estate to ..."

In 1841 the sailing ship Rover was wrecked on the rocks at the mouth of the creek.   In 1904 Joseph White recorded his recollection of that event, he called the creek Kundelcar.

Between 1946 and the 1960s, Jenny Nelson (nee Reid) of Broulee grew up at Longvale near where the Princes Highway crosses Lynchs Creek.  Lynchs Creek flows into the Mossy Point Creek, and Jenny's family ran cattle on The Oaks and provided milk for Mossy Point.  Jenny grew up calling the creek Candlecut but thinks it was in the 1960s when she started hearing it called Candlagan, rhyming with "land wagon".   Her husband Les was a delivery driver in the 1960s, his earliest recollection is of Candle Gut Creek.

Elaine Clark came to live by the creek in 1949. She recalled that in the early days the creek was called both Candle Cut and Candle Gut.   She too recalled Christian Banks' house that was close to the Mossy Point side of the old footbridge, it bore a proud sign that it was Candlecut Cottage.

Bert Duckworth lived at Mossy Point in the 1950s, he used to paint one-off postcards for sale in the post office store.  One that still exists is titled Candle Gut Bridge and Broulee, there's a copy of it in the Gallery.

And since all of that, we now hear it called "Cand-ah-lah-gahn", the best guess about where that came from is that it's like the girls who jokingly say that they shop at "Tah Zhay" rather than saying "Target".

So we've got an aboriginal name Cundalgah recorded in 1828; and we've got Candlagan in 1839. We've got an 1884 will referring to Candlegut Creek. The 1904 first-hand report of the 1841 wreck of the Rover called The Creek Kundelcar.  And in the 1940s to the 1960s we knew The Creek as Candlecut or Canglegut.

Rod Shanahan's family bought in Broulee way back, he grew up understanding that the name was aboriginal.

Richard Fisher says: "A couple of years ago, I was again at Mossy Point with Jeannie Stewart, who had been a teenage Jeannie Nye when I first knew her there in the 1940s. Her Aboriginal family had moved to Mossy Point in 1932, her parents were respected members of the European community there, and of the local Aboriginal community as well. As far as Jeannie was concerned, the Mossy Point creek is Candlecut Creek, that's what her parents told her it was. We both grew up believing that the name was aboriginal."

We wrote down Bejing as Peking, Mumbai as Bombay, and "Pahree" as Paris.  Surveyor Florance also recorded the local name for Moruya in 1828, he wrote it down as "Mherrayah".  In 1829 in the Sydney Gazette Moruya was written as "Murroa". What we've done locally is, we've tried to write The Creek's Aboriginal name down in our language. As mentioned earlier, that was the Government policy.  Our language gives us 'bought', 'caught', 'sort', 'taut', and 'wart' - all spelt quite differently, but they all rhyme.   When you add to that the "thickness" of the Aboriginal accent, it's not hard to argue that Cundalgah, Kundelcar, Candlecut, Candlegut and Candlegan are all from the same aboriginal word - say them out loud with a thick and round accent to hear for yourself.  Let's not forget that a nineteenth century surveyor at Cape Howe, who was not the first there, pointed to the island offshore and asked a local aborigine "What's this place called?" and was told in a very thick accent Cape Howe, which he then wrote down as Gabo.

Unfortunately, our society lost touch with the local Aboriginal dialect many years ago, we called it Djurga or Thoorga - a good example of two quite different spellings for the same spoken aboriginal word.  But there is one aboriginal word from NSW that may be of interest. It's phonetically spelled "kandelka" and it means "good".

And now, to further confuse the issue, the pictures below are from a map produced in 1834, it shows 'Candalga' for the Creek.

So us old-timers will go on calling the creek Candlecut or Candlegut, which sound just like Kandelka, the aboriginal word for "good".  But then, we're told that a rose by any other name would smell as sweet, so does our pronunciation matter that much?  Not really, because no matter how you pronounce its name, it truly is a good creek!