Below is a brief summary of an article by Tony Abbey and Shirley Clifford "The attack on the Dureenbee" which appeard in The Canberra Times on Saturday 27 December 1980. It's available on the National Library's "Trove" website (search for NLA Trove).  Tony had dived on The Dureenbee as a part of his running of the Mossy Point Dive School.

The article tells how the people of Moruya heard gun fire in the early hours of August 3, 1942. The sounds were those of a Japanese submarine attacking a fishing trawler, the Dureenbee, about 25 kilometres off Moruya Heads.

The trawlermen were unaware of the submarine until there was a flash of light followed by an explosion. Immediately upon realising their situation the wireless operator, Wilson, sent out a distress signal. Before he could signal again the submarine's machine guns opened fire and Wilson lost his hand. Machine guns continued to fire and eventually destroyed the wireless shack and injured Wilson further.

The submarine fired another two four-inch shells into the Dureenbee's superstructure. They destroyed the wheelhouse.and damaged the main steampipe, bringing the vessel to a stop.

The submarine fired another eight four-inch shells into her. After a further 45 minutes' target practice the Japanese vessel submerged, resurfaced six minutes later and then headed out to sea.

Captain Reid then sent up flares. On checking his crew he found one member dead and two seriously wounded, the remaining men suffering only minor injuries.

At 6.20am, approximately 4 1/2 hours later, an RAAF aircraft stationed at Moruya located the Dureenbee and then led a rescue vessel to her.

The rescue vessel was a local trawler, the Mirrabooka (meaning Southern Cross) owned by brothers Raynor and Gus McDiarmid and a friend, Cecil Williams. They had left Moruya at 2.30 am with lights ablaze to alert survivors of their presence.

The body of Arthur Scrobles was taken on board. Able Seaman Archibald McPherson, who was very badly wounded, died on the journey back to Moruya. The third crew member fatally wounded, Chief Officer Alexander Reid, died several days later in hospital.

Raynor, Gus and Cec, in their trawler, set off at 5am the next morning with two men from the Commonwealth Salvage Board. The Dureenbee was found hard aground, with her back broken. Her location: Richmond Bombora, about 1 1/2 kilometres north of Batemans Bay. Salvage was not possible, and today the Dureenbee still rests off the Richmond Bommie.

The McDiarmid brothers and Cec Williams received Royal Humane and Shipwreck Society Awards for their courage and tireless efforts shown throughout the whole incident.

The Merchant Navy headstones in the cemetery serve as reminders to the people of Moruya of the night the war came their way.

This ends the summary of Tony and Shirley's article. 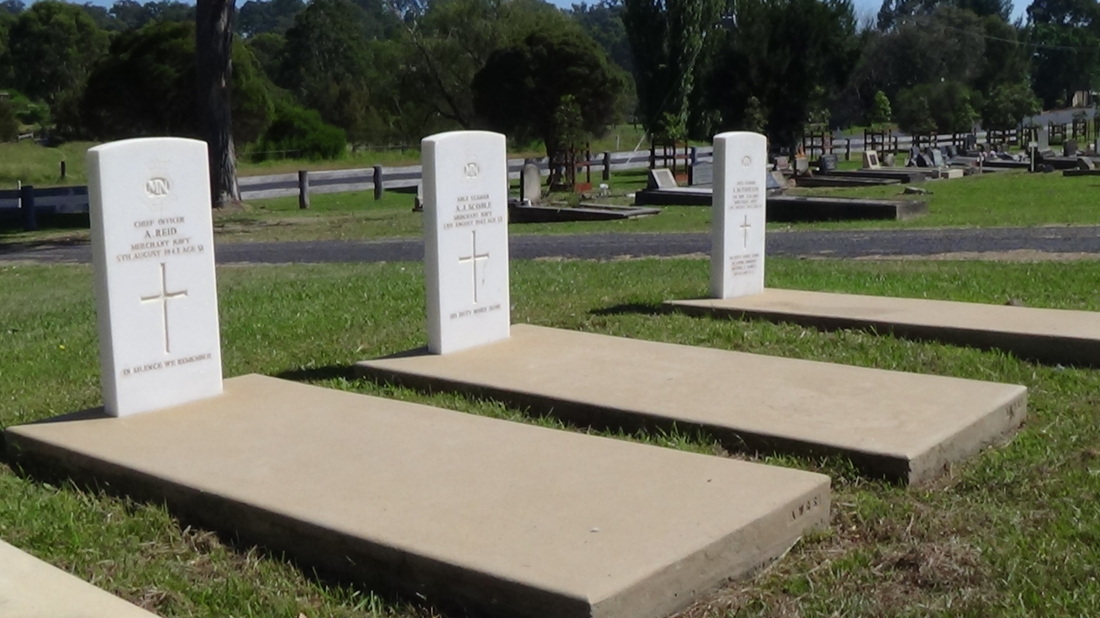 Moruya Cemetery Graves of the Dureenbee Crewmen. RF.
After the attack, the following official press release was issued.  Unfortunately Tony was not aware of it, so we can but imagine what he might have said in response to the claim that the trawler had made it back to port.  As well, we now know that the attack was 25km off Moruya Heads:

"Wednesday 5 August 1942. General MacArthur's Brisbane headquarters yesterday announced that a submarine had recently attacked an Australian fishing trawler 20 miles off the Australian coast. The raider surfaced about a mile from the trawler and fired upon its occupants with shells and machine guns. Two men were killed, but the vessel remained afloat and was taken back to port.

Yesterday's announcement is the first official indication since June that Japanese submarines continue to operate in Australian waters. Close relatives and friends of those killed on the trawler gathered for their funeral yesterday. 'The Axis powers have delighted in murder and piracy on the high seas' the clergyman leading the service said. 'The shells which laid our brothers low were not merely fired at them, but were aimed at trying to create panic among the people on the shore. But I am confident that that aim will not have any such result.'"

As US senator Hiram Johnson said: "The first casualty when war comes is truth." 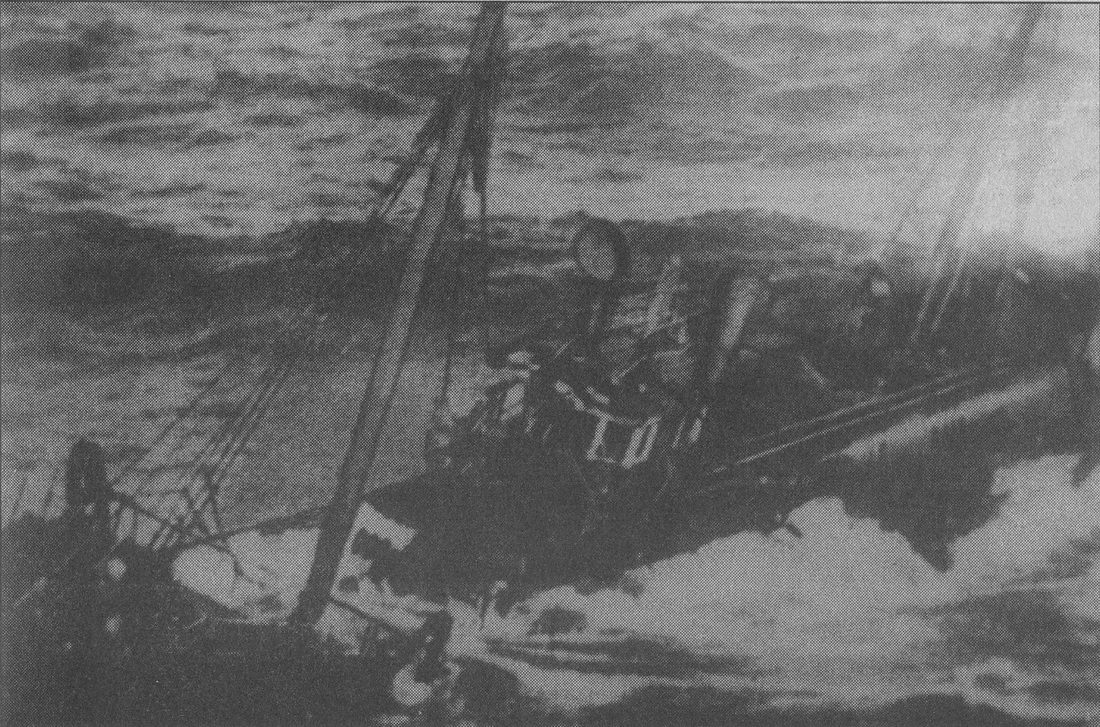 With her funnel blown off and foundering on rocks north of Batemans Bay, a sad end for the Dureenbee. 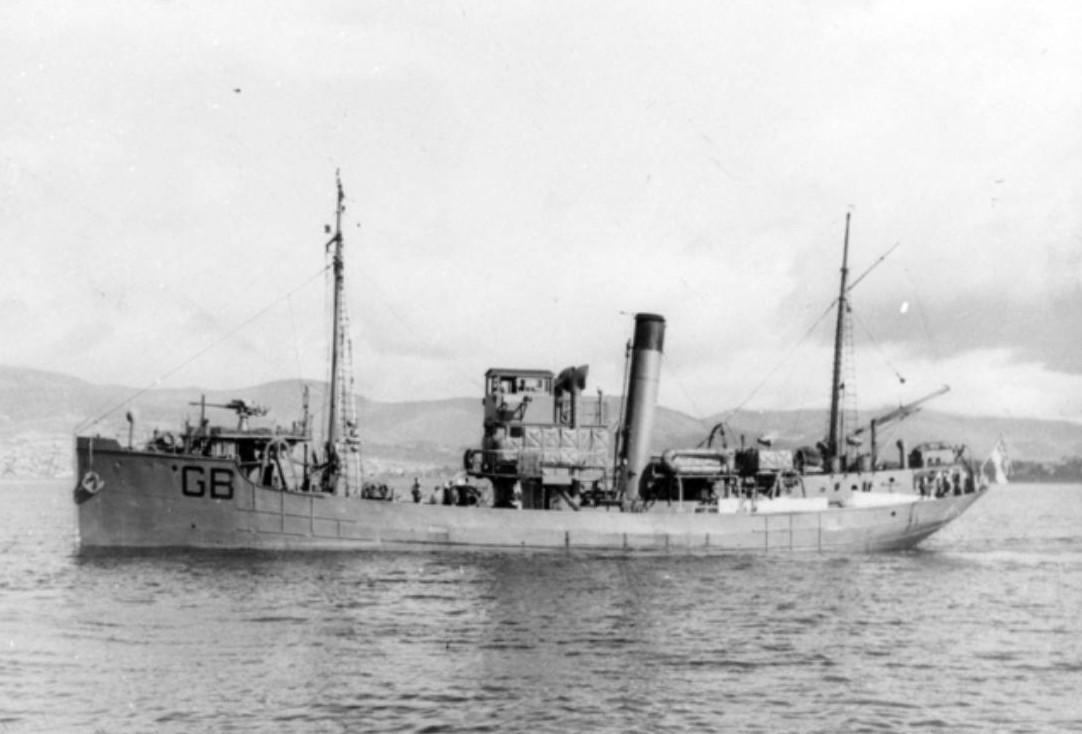 In the absence of a better picture of the Dureenbee, this is HMAS Goonambee, commissioned by the Royal Australian Navy as a minesweeper in WW2. A sister ship of the Durreenbee, built by NSW State Dockyards in 1919, so very similar. As well as large vessels, many small vessels were pressed into service as part of the war effort.