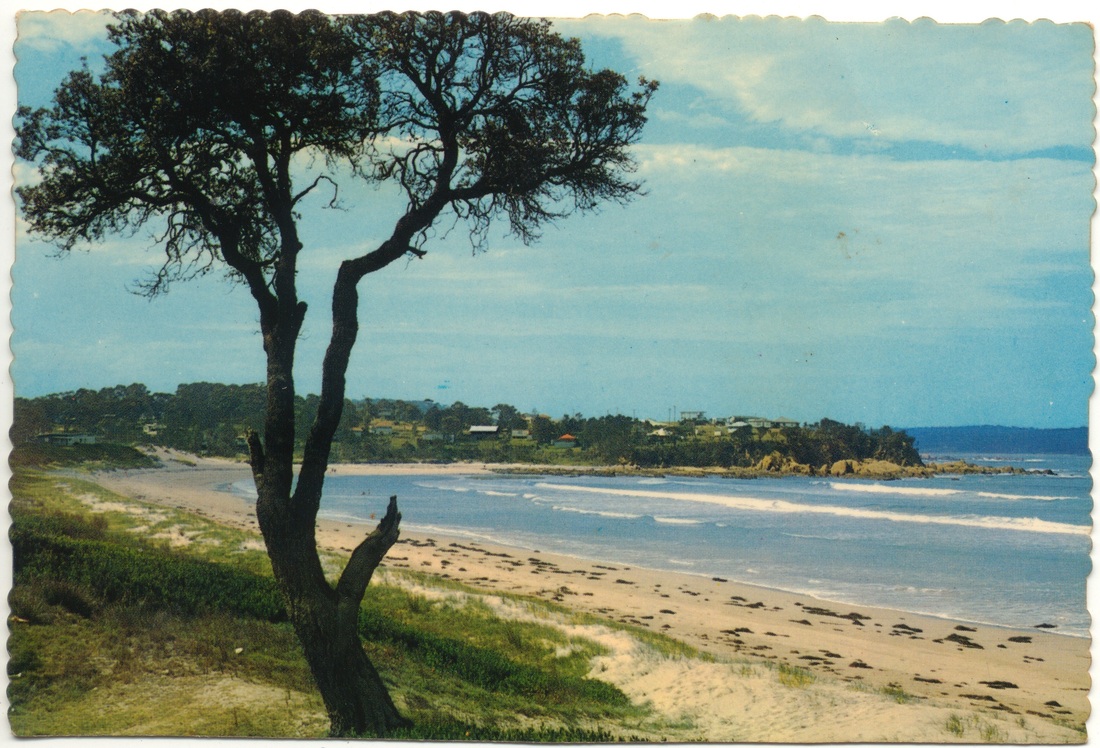 A 1966 Postcard Showing The Pipi Tree. RF.
The Pipi Tree stood on edge of the dunes, almost at the mid-point of Broulee Beach. It was the only tree that was so close to the beach – sometimes the sea would wash away the dunes right to it – so it was a well-known landmark.

In the 1950s pipis were prized by anglers seeking the flathead that abounded just off Broulee Beach, and the place to gather pipis was in front of The Pipi Tree.  At low tide we’d walk into knee-deep water, find a spot and move our feet in a way that later was to be the popular dance craze ‘The Twist’.  After we’d worked our feet down about 10 centimetres into the sand, if you felt something hard you’d reach down and bring up a pipi, or occasionally a hermit crab.   Moving around, we’d gather about eight pipis per angler, and then leave the rest for next time.

In the early 1960s the pipis migrated south, first about 100 metres, later on about twice that far.

But aside being the marker for the pipi colony, the tree had other uses as well.  Most of the crowd would gather on the northern end of the beach, and The Pipi Tree was used by countless parents as a marker for how far children were allowed to walk before they had to turn around and head back to Mum and Dad.

By the time that the 1960s arrived, as teenagers we used The Pipi Tree as a meeting point.  If a couple of Mossy Point boys met a couple of girls from the south part of Broulee, they could press them to meet them “at The Pipi Tree at 10 o’clock tomorrow”.  Sometimes it worked, and the summer holiday would be better as a result.

When the waves were a bit big even for The Gang on the surfaplanes, all would move south "down towards The Pipi Tree a bit".  Fishermen would suggest that the bream might be biting "Just this side of The Pipi Tree."   In the absence of anything else, it was the marker for all that might happen in the middle part of the beach.

In reality, it was a gnarled old banksia.  Quite old in fact, because part of it is at the edge of one of the photos in the 1927 land sale brochure for Connells (later Mossy) Point.

It was either the late 1960s or the early 1970s that half of the tree - on the water side - broke off.  Nevertheless, the part that was left still served as an iconic landmark. Unfortunately, we don’t have a photo that shows the whole tree in its full glory.

One year in the first half of the 1980s, families arrived for their Christmas holiday and found that the dear old Pipi Tree was gone. It was a sad passing but the memory, a very fond memory for many, still remains.