A Japanese I Class Submarine - They Prowled Off Our Coast.
This is a version of an article written by Richard Fisher for the Moruya “Anniversary of D-Day” celebrations 2004, and published in the Bay Post/Moruya Examiner.

How many people who are living in the Eurobodalla today know that Moruya Cemetery has the graves of three trawler men who were killed in an attack by a Japanese submarine in World War 2, just 25 kilometres off Moruya Heads? With Moruya’s Heritage Weekend coming up, it’s worth catching up with some of what went on during the war.

Towards the end of 1941 the war in Europe was going badly for the Allies, and by February 1942 the Japanese had overrun Australia’s northern neighbours. In the first bombing raid on Darwin 243 people were killed and 320 wounded. All Australians feared an invasion.

For people living in the Eurobodalla, Canberra was eight hours away by road, if the creeks weren't flooded. Nowra was more than four hours away along the winding, unsealed Princes Highway, and there were railways at Tarago, and Bombala. If the Japanese landed, Australian troops might arrive in time to confront them. Batemans Bay, Moruya and Narooma had about 2,500 people between them, so the Eurobodalla really was an isolated outpost.

On 21 May 1942 the RAAF detached No 11 Operational Base Unit to Moruya aerodrome, it would later be supported by No 17 Radar Station on Burrewarra Point. The base was still being set up when, on 31 May Japanese midget submarines entered Sydney Harbour and sank HMAS Kuttabul, and 19 sailors drowned. Those war deaths were closer to the Eurobodalla than any others up until then.

The following day, 5 June, the Echunga was attacked but not sunk 25km south east of Wollongong. It was the same outcome three days later for the Orestes south east of Jervis Bay, less than 100 km from Batemans Bay.

On 8 June a Japanese submarine shelled Sydney suburbs, making it quite clear that every coastal settlement was under threat. 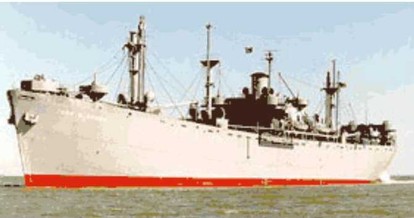 A US Built Liberty Ship - All built to the same design, welded not riveted, Intended to last out the war but that was all.
There was a bit of a lull in activities until 20 July when the Greek ship George H Lavanos was sunk off Point Perpendicular 125km north of Moruya, fortunately with no casualties. No such luck the following day, when a crewman was killed when the Coast Farmer was sunk 110 km north of Moruya.

On 22 July the Liberty Ship William Dawes was torpedoed off Tathra. An eighteen metre launch from Moruya went to the area to assist, while the ship burnt from stem to midships before sinking. Five crew were killed but four boatloads of survivors, several of them injured, were rescued.
And so it was that the war came to the Eurobodalla. How tense would it have been for the local trawler men watching every white-cap to see if it was a periscope, and for everyone else whenever an unidentified aeroplane appeared. There were local people in the Volunteer Defence Corps who kept watch over the sea and shore 24 hours a day. There were local people in the Volunteer Air Observer Corps, they reported every aircraft sighting, watching for the enemy and providing vital information about planes that had gone missing.

And on the land and on the sea the region’s vital industries kept going, giving crucial support to Australia’s war effort in those dark days. The Eurobodalla certainly has an abundance of World War 2 heritage to be proud of.


Let’s not forget that the war did come to the Eurobodalla.

Below is a plan of the Moruya Aerodrome during World War 2. 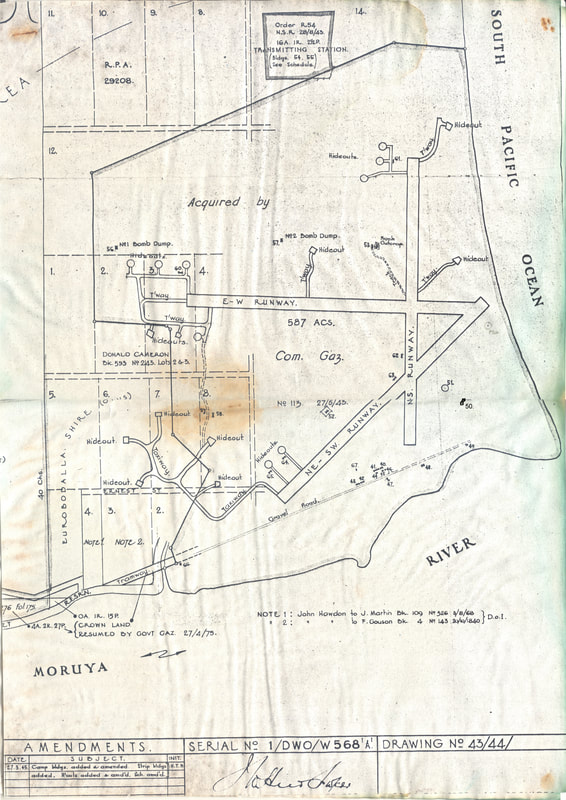