In 1827, surveyor Thomas Florance mapped the island that he called “Brouhlee”, it was joined to the mainland by an isthmus. It was departmental policy to formally name places with their Aboriginal name, spelled as best the surveyor could.

As early as 1836, a port was formed off the beach on the leeward or bay side of the island.  First called Ark Harbour, it became Boat Harbour.  Small boats ferried passengers and goods to ships anchored there, which could be seven tonne cutters or seventy tonne schooners. Produce, mainly potatoes and maize, although some say corn, was punted down the Moruya River and then along Bengello Beach to the port. Liquor which was dodging liquor taxes was often landed, headed for the Monaro.  On one occasion difficult-to-get-on-with smugglers threw a constable overboard.

Track or road transport to Sydney was hardly if ever used, and the Sydney Morning Herald noted on 30 October 1841 that “Broulee is becoming daily of greater importance; scarcely a day passes without the arrival or departure of some vessel. I have seen as many as six vessels at anchor in the roadstead [water near the shore where ships can ride at anchor] at the same moment.”

The Erin Go Bragh Inn.  Broulee was the only port between Wollongong and Twofold Bay at Eden.  Captain William Oldrey had an inn built on The Island on the high ground pretty well nearest to Mossy Point during 1840-41.  It was built from American redwood and leased by Bernard McCauley in 1842 who named it the Erin-Go-Bragh (Ireland Forever).  It was a low shingled weatherboard bungalow painted white.

The 1841 census found that there were 46 people living in Broulee in one inn, one court house, two stores and two houses.  We guess that the common "bark hut" didn't count as a house for census purposes.

However Broulee declined from then and in 1848 only one person permanently resided there.  But then for a couple of years from late 1851, thousands of diggers heading for the Araluen goldfields made the journey to Broulee not only in Sydney ships but by some from other colonies or other nations.  After landing they walked the 50 kilometres to Araluen, some hired packhorses at Mullenderry for 25 shillings for 100 pounds weight.  But like all gold rushes, after a few years it was all but over.

In the 1850s the inn was disassembled and re-built in Moruya where it was bought by Abraham Emmott in 1859 who named it Merlyn House.  Used first as a residence and store, Emmott prospered and was able to move the store to a building where Harris Scarfe is today, and his family to a new brick building.  Merlyn House was afterwards used as a residence for over 100 years.  Eurobodalla Shire Council demolished this iconic and historic building in 1978 to make way for new buildings.  The Fatches family lived in Merlyn House In the 1970s. 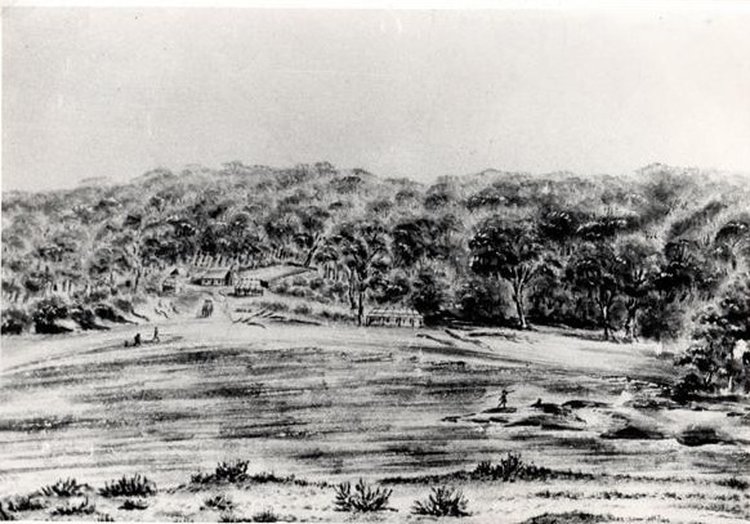 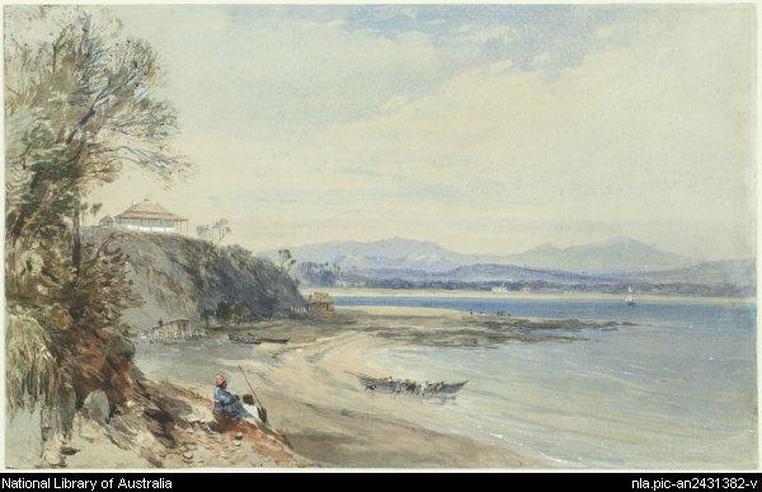 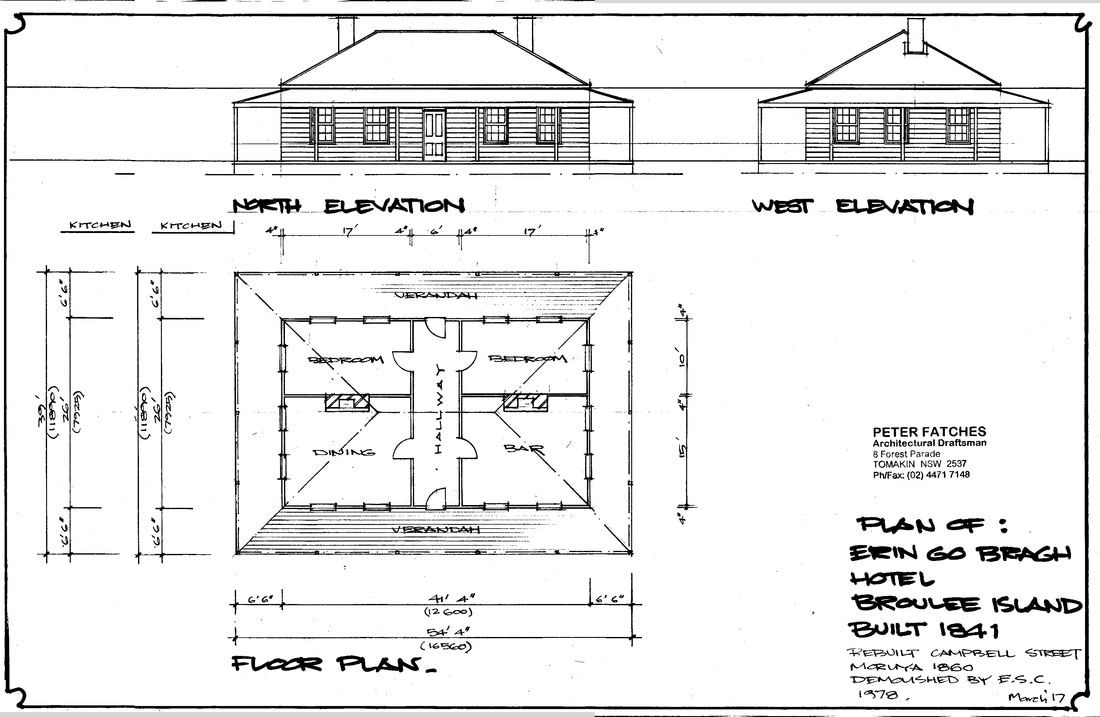 Plan Of The Erin Go Bragh Inn Produced And Provided By Peter Fatches 2017.

In 1920 Clem Jones, began collecting shellgrit from The Island, see the page for Shellgrit Bay.  Clem worked at Cooks Timber Mill on the banks of the Tomaga River, and he and his wife owned a boardinghouse by the mill, Mrs Jones ran it.

Later on holiday makers began to come, and Broulee began to develop its present culture.

In the late 1950s or early 1960s Eurobodalla Shire Council auctioned off for unpaid rates the island blocks that had been surveyed and bought in the 1800s. But the government then resumed the lot for the nature reserve that we gladly enjoy today.  Some of the blocks had different titles to others, and some of those who purchased blocks at the auction were compensated for the resumption.  Jacks, Turners and Clarks were required to relinquish their blocks on The Island without compensation.
The then Shire President was one of a band pushing in 1978 for a pulp mill in the area.  The proposal included a causeway to Broulee Island (which was an island at the time) and ship loading facilities there.  An added benefit, people were told, would be that a wonderful marina could also be built there for recreational boats. 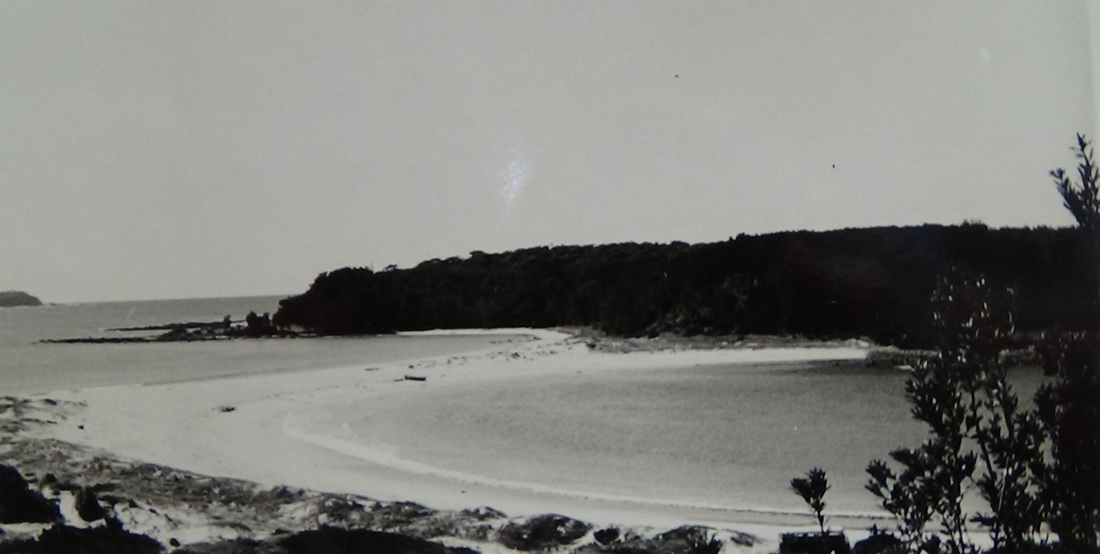 The sand spit to The Island, date not known. At times, that spit would have been under 1.5 - 1.8 metres of water at high tide. Photo courtesy of the Moruya and District Historical Society. 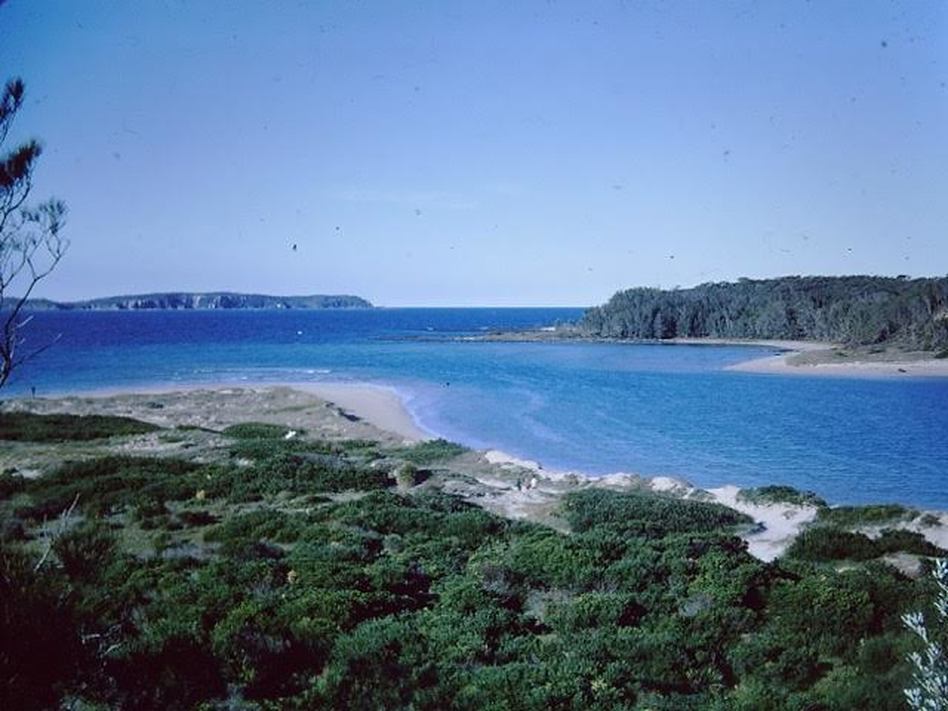 Island was an Island in 1966. Photo, Plumb Family. 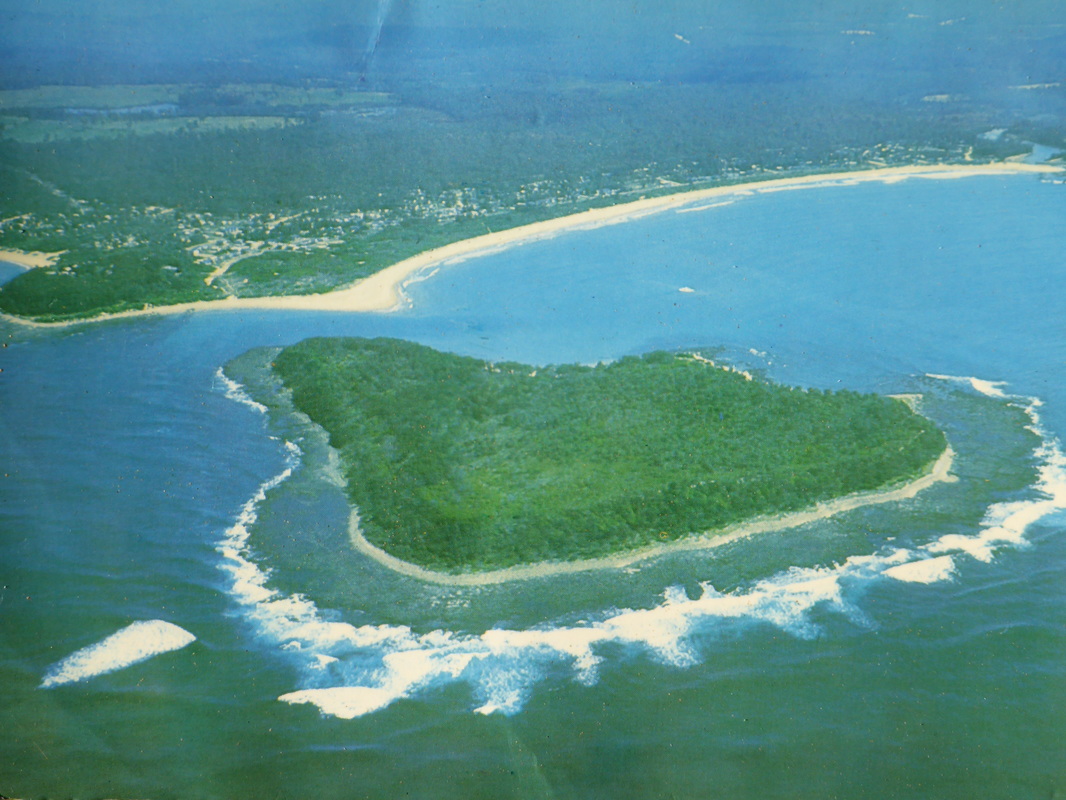 A Postcard from around 1970. Courtesy Kevin Murphy. 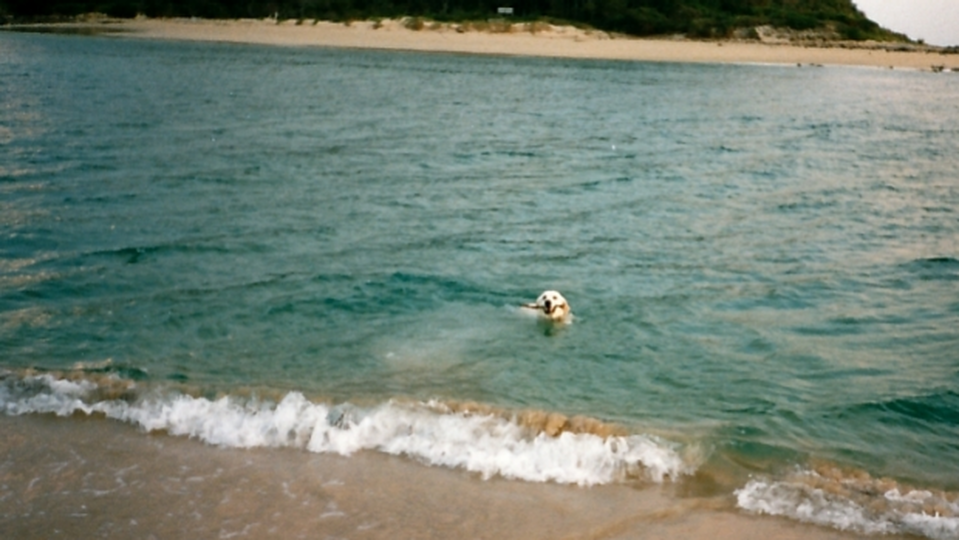