Loss Of The John Penn

In 1879 the TSS John Penn (Twin Screw Steamer) ran aground at Burrewarra Point, and the next day sank while being towed to Boat Harbour (in the lee of Broulee Island).   In the 1970s it was rumoured to be sometimes visible to snorklers, one claimed to have been on the surface looking down the funnel.   In fact, it is the funnel-hole in the top of the boiler that's sometimes visible from above.

Formal notification of re-location by Riley and Laybutt was in 1982.  Powered by twin 'simple' action steam engines, the layout of independently driven twin screws had been introduced only five years earlier.   It's now a heritage wreck, lying in 12 metres of water between Mossy Point Headland and the north-west tip of Broulee Island. 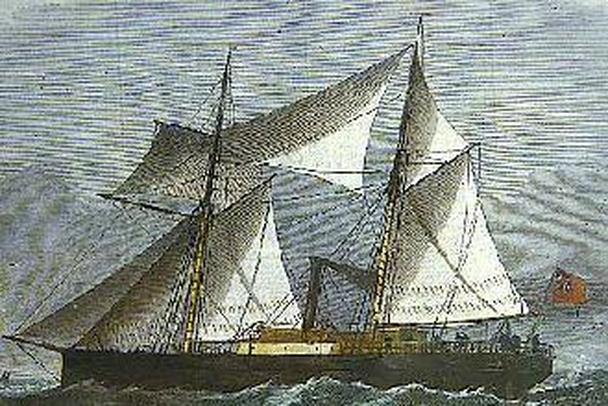 TSS John Penn
The John Penn sailed from Tathra for Sydney on Friday, 7 November, 1879 with a mixed cargo and a number of passengers.  By midnight, thick fog had encroached upon the steamer, making it impossible to see more than half the length of the vessel.  Captain Holden did not reduce speed but steered a course which he thought would keep the vessel well off the dangerous coast.  However, just before 2 am, the John Penn drove up on rocks at the foot of Burrewarra Head in flat seas.  Captain Holden later blamed the wrecking on a faulty compass.

The Captain, passengers and crew disembarked onto the rocks and one of the ship's boats was dispatched to Bateman's Bay to notify the authorities of the loss.  The steamer Hunter dutifully ventured to the scene the following morning and took on board the passengers and cargo.
Hawsers were then passed between the vessels in an attempt to refloat the John Penn at highwater.  With some effort, the steamer was dragged from the rocks and towed stern first towards nearby Boat Harbour, that is, towards the beach side of Broulee Island.  Damage to the hull was more severe than anticipated, and the John Penn foundered whilst under tow in 12 metres of water.  A later attempt to drag the steamer ashore with the Hunter and Kiama failed.  The wreck was subsequently sold on 3 December, 1879 for £250.

A Marine Board of Enquiry found Captain Holden culpable in not slowing his speed and for not using a sounding lead in the foggy conditions.  His certificate was cancelled for three months.

Clarrie Munz, a linesman from Canberra was a keen fisherman and in the 1970s and onwards he owned the house almost opposite Muffins which has the anchor in the front yard.  He too told Tony Abbey, who ran the Mossy Point Post Office Store and the Dive School, of the presence of a sunken ship fouling his fishing lines in the Bay.   Such a story had been doing the rounds for many years.  Tony Abbey worked out that it had to be the wreckage of The John Penn.

After a lot of “treasure hunting” an old aerial survey photo was turned up, it had latitude and longitude grids on it and faintly showed the outline of a ship on the bottom of the Bay.   This meant that the precise position of the wreckage could be determined.   In September 1982 the Mossy Point Dive School set up an expedition.  Using shore-based lookouts equipped with hand held radios, the dive school launch proceeded under direction from the lookouts to the exact spot, and a buoy was dropped.  With the weather worsening, one of the group on the launch, who was from Sydney, went down for a look but when he came up he said that there was nothing there.  The launch returned to shore to gather the rest of the team and their dive equipment, but the weather turned foul and it was decided to make another trip at a more favourable time.

A few days later the Sydney divers sneaked back, dived the wreck, recovered the ship's bell, went home to Sydney and got themselves written up as celebrities.

Shortly after that, in October 1982 the wreckage was protected by gazetted legislation as a heritage site.  However, that didn't stop divers from Sydney plundering the wreckage, taking in particular quite a lot of cutlery stamped "MPDS".  The Mossy Point group heard that Sydney divers were proudly showing off their booty to admiring friends, and selling the cutlery “all over Sydney”.  But that seemed to stop once the Mossy Point group put the word out that they had gathered quite a quantity of free or cheap old cutlery, stamped onto it “MPDS” and planted it among the wreckage.  And that "MPDS" stood for Mossy Point Dive School.

When the Mossy Point Dive School team finally did dive on the wreckage, they found that some plates, brass, and copper had been previously removed. As mentioned earlier, the wreck was sold at auction on 3 December 1879 for £250, there's no way of knowing whether parts of the wreckage were salvaged by a hard hat diver around 1879 or whether the salvage took place years later.  Nevertheless, the absence of knowledge about the wreckage in the 1940s – 1970s makes it pretty well certain that it was not scuba divers that had worked on it.

There is a fact sheet on line, provided by the NSW Office of the Environment and Heritage.