“My grandfather was Dr. Bertram Dickson, Chief of the Division of Plant Industry in CSIRO.

Born in England, he was educated in Canada and served in the Canadian Army in WWI. In
1927 he was invited by the Australian government to join the CSIRO. Among other things he
was involved in planning the Canberra Botanic Gardens .

Canberra in the 1920s was a small place, and my grandfather longed for a sanctuary away
from politics. As a former resident of Canada, he knew the Canadian custom of having a
“cottage” where one could avoid the sweltering summers in the city.

So when Mossy Point was subdivided (I believe it was formerly a dairy farm), he was one of
the first to purchase a block. He bought a house that had been used for officers' housing
during WWI. This was disassembled and shipped to Mossy Point, where he re-assembled it
himself, with my mother (then six years old) handing up the nails. This would have been in
1931. He did not neglect to include a billiards table, around which the house was built. He
named the house Amaroo, but in our family it was always referred to Canadian-style as “the
cottage”.

He generally spent holidays and other free time at Mossy Point whenever possible, However
during WWII the house was sometimes loaned to people who needed a quiet place to
recuperate from PTSD.

Of course there was no telephone service, so once my grandfather went down there he was
totally out of communication with the world outside, which I'm was exactly how he liked it.
I did not enter the picture until the 1950s, but little had changed. For water we had the
traditional galvanized iron rain-water tanks. My mother remembered an occasion in the 1930s
when they allowed a fire crew to drain the tanks to fight a bush fire. There was no electricity.
We had kerosene lanterns and a Coolgardie Safe. There was one engineering professor who
set up his own solar-powered 12V lighting system, but he was a exception.

I think there was a little shop at Mossy Point that sold basic necessities, but for major grocery
shopping we had to drive to Moruya.

My mother cooked Christmas dinner for 10 people on two Primus stoves. I remember my
cousins used to fight about who got the sixpences in the Christmas pud, so my mother would
secretly put them in after the slices were already cut so that everyone got one (as she
confessed years later).

Even getting down to the coast was an adventure. The road was in very poor condition and it
was slow going. We'd stop at Braidwood to buy bread and milk. Then there were two ferries,
at Nelligen and Bateman's Bay. If your timing was off, you had to sit and wait for the
ferryman to have his lunch, as happened to us at least once. I used to like the ferry at
Bateman's Bay because I could get out of the car and look over the rail to watch the jellyfish. I
see that the bridge was opened in 1956, so this was an early memory for me.

As I remember, even in the 1950s a lot of the blocks at Mossy Point were vacant and the
houses were pretty spread out. We did all get together for a picture show from time to time. I
think the projector was powered by a generator that was placed behind a tree to dull the
noise a bit. We would all troop down in the dark carrying our lanterns, chairs, blankets, etc. I
don't remember the films except that they were popular Hollywood films of the time.

My parents relocated somewhat unexpectedly to Canada, so we were not around in the 1960s.
I suppose as my cousins got older they must have been less enthusiastic about spending all
their holidays in such a remote place, where there wasn't much for teenagers to do. My
grandfather eventually sold the place in 1966 and moved to a seaside flat in Cronulla, where
his son lived.

The cottage did play an important part in my mother's life, as she went there regularly for
nearly thirty years, through growing up, the death of her mother, marriage and motherhood.
In later years I think that she may have gone there mentally at times. She bought a painting of
a little girl sitting on a beach and hung it up in the sitting room.” 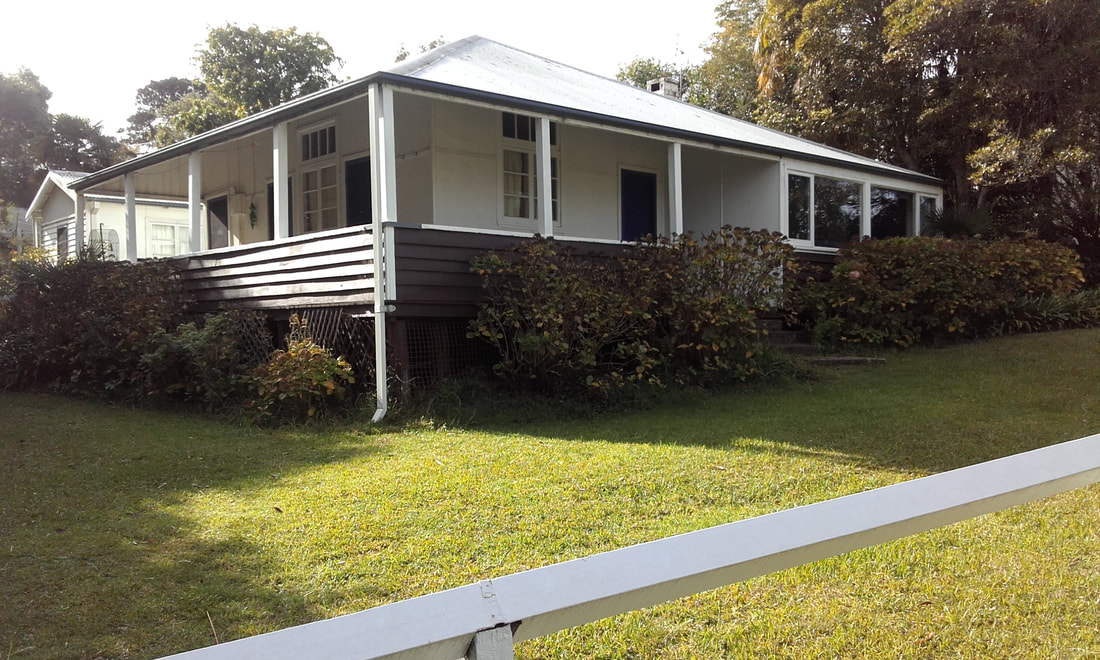